Church Point (Nova Scotia) April 18, 2018 – The Municipality of Clare is pleased to announce the appointment of Chantal Surette to the position of Manager of the Visitor Information Centre and Programming for the Rendez-vous de la Baie Visitor Centre. Her duties will include managing the Visitor Information Centre, offering guided tours of the Acadian Interpretive Centre, as well as coordinating and leading guided tours of the Le Petit Bois trails and the Church Point Lighthouse. From April 20th to 22nd, Ms. Surette will be representing the Municipality of Clare at the Saltscapes Expo in Halifax with Larry Peach, Clare Tourism Manager. As part of the Tourism Division, she will also be participating in various tourism initiatives, including marketing projects.

Originally from Meteghan, Ms. Surette holds a Bachelor of Science (2017) from Université Sainte-Anne. She most recently worked as a Waste Compliance Inspector with Waste Check in Yarmouth, as well as a marine biology interpretive guide in 2017 at the newly opened Church Point Lighthouse. She also worked as a summer event coordinator for the Recreation Department of the Municipality of Clare in 2015 and 2016. She has been an active volunteer at the Clare Curling Club, at Université Sainte-Anne’s swimming pool and more recently with the Gran Fondo Baie Sainte-Marie.

Ms. Surette first took up her duties on April 2 and will hold this seasonal position until early December. She can be reached at 902-769-2345, or by email at vicclare@gmail.com. Her office is located at the Rendez-vous de la Baie Visitor Centre, 23 Lighthouse Road, Unit 1, on the campus of Université Sainte-Anne, Route 1, in Church Point. 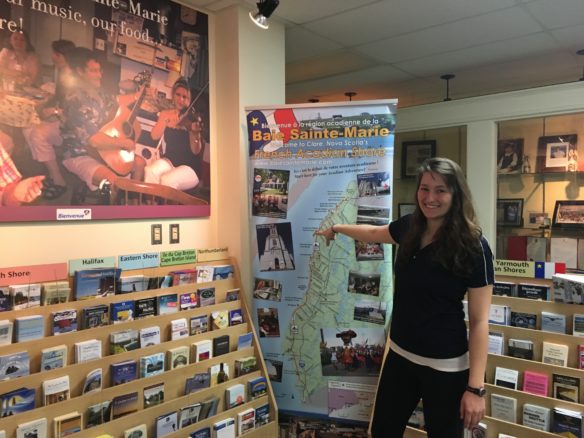 I am very pleased to share with you that the new and improved Rendez-vous de la Baie website is now “Live”!

I love the new design and navigation developed by Nyna Cropas, she has been a genuine pleasure to work with! We have put in countless hours on developing design elements and adding updated information on all of the features and functions of the Centre. Learn about the recent additions to the Centre, such as the outdoor performance area and the public meeting room. Check out the Calendar to discover information on events happening in Clare. And you may have heard that new for the 2012 season, the Acadian Interpretive Centre (the museum) will be open free to the public! We encourage you to share the Centre with your family and friends, and to visit often!

You will note there are new pages in the “Visitor Information Centre” section, which offers listings and links for Clare tourism businesses, experiences and partners.

It would be greatly appreciated if you would consider adding a reciprocal link back to the Rendez-vous de la Baie website (and if you are not already included, perhaps we could provide reciprocal links to our respective websites).

Don’t hesitate to visit the website often, since new content will be regularly updated. Please let me know what you think — much appreciated! 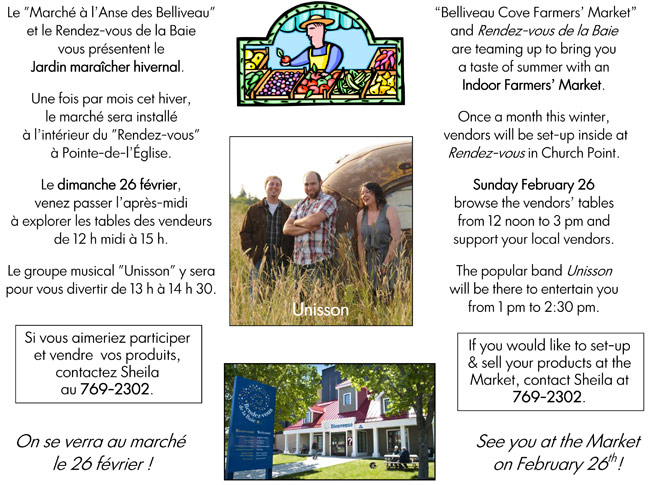